Continuing the articles related about understanding the Azure Stack components and features (previous article: “Consumption Model vs Capacity Model”), in this post the idea is to cover the Infrastructure as a Service (IaaS) components available.

As we already know, Azure Stack is intended to be the Azure instance in your datacenter, but even though they are using the same code, there are still some disclaimers to consider regarding Azure features available in Azure Stack. Also the intention in this article is to provide easy and quick comparison charts between Azure Stack vs Azure components. 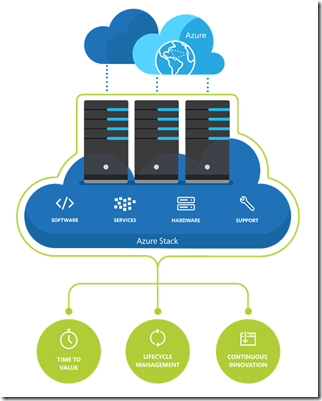 Not all the components described in this article will be IaaS per-se, I’m separating the services in different articles for practical purposes. What I’ll cover in this article is:

Offering Virtual Machines is, as we all know, the main concept for “Infrastructure as a Service” (IaaS). The public Azure version has over 20 (to this date) different VM types, which translates in several more different sizes within VM types; Azure Stack has a reduced version of those sizes.

Here are some important disclaimers about Azure Stack VMs to consider:

In the Dell EMC blog, there’s an interesting article written by Paul Galjan, regarding IaaS and Azure Stack. The interesting discussion relies on a comment made about a Microsoft Program Manager: “Azure Stack is not a virtual machine dispenser”.

Before generating a confusion with that statement, the intent of that comment is related about if you just need to provide virtual machines and nothing else, there are probably more efficient ways to deliver that instead of Azure Stack. The solution is intended to provide much more than a “virtual machine dispenser”.

Virtual machine extensions is a component highly used in Azure, basically the extensions are small applications that provide post-deployment configuration and automation tasks on Azure virtual machines. There are common extensions available to allow simple tasks as resetting administrator’s password or deploy an anti-virus; or more complex ones like implementing a Docker configuration.

The possibilities for tasks to execute are pretty much infinite since the extension for “custom script” is available, where you can integrate it with ARM templates, Azure CLI, PowerShell or the REST API.

In Azure Stack, here’s the list of current VM extensions available (more extensions expected to be available in future updates):

As a quick overview let’s take a look for a comparison between Azure Stack VMs and Public Azure VMs:

In case you were wondering the specifics on the resources available on each of the VMs for Azure Stack, here it is:

Virtual Networks in Azure Stack is the simple representation of physical network and a logical unit of isolation.

Here are some disclaimers about Azure Stack Virtual Networks to consider:

The Azure Load Balancer represents the service to provide high availability and network performance to applications integrated with this component. An Azure Load Balancer is a Layer 4 (TCP, UDP) load balancer that distributes incoming traffic among healthy instances of services defined in a load-balanced set.

There are two considerations around Azure Stack Load Balancers:

Here are some considerations regarding VPN Gateways in Azure Stack:

Here’s a comparison chart for the networks between Azure Stack and Public Azure:

Since Azure Stack could be represented as a segment network separated from the public cloud and/or the on-premises environment, Microsoft included the Internal DNS feature (iDNS) feature. This concept originally appeared in Windows Server 2016 in the Software Defined Network (SDN) definition.

In Azure Stack, iDNS allows you to resolve external DNS names and internal virtual network names. Customers can still bring their own DNS servers into the environment, but if the requirement is just to resolve Internet DNS names and connect to other virtual machines in the network, iDNS can do the trick.

It is a cost-effective solution since you don’t need to deploy your DNS servers and additionally you don’t have to expose these servers to malicious attacks.

Azure Stack storage was built with the same principles than Windows Server 2016 Software-Defined-Storage (SDS). The storage components we can find in Azure Stack are: Blobs (what we usually use as the OS or data disks in VMs), Tables (NoSQL key-attribute data store for fast access to large quantities of data), and Queues (letting cloud software communicate via messages).

Here are some considerations about Storage in Azure Stack:

Initially it was expected that Azure Stack in GA was not going to include Storage metrics features available, but eventually it ended up included. Here’s the reference about the cmdlets available in Azure Stack related to storage and includes metrics: “AzureRM.AzureStackStorage”.

Here’s a comparison chart for the storage between Azure Stack and Public Azure: 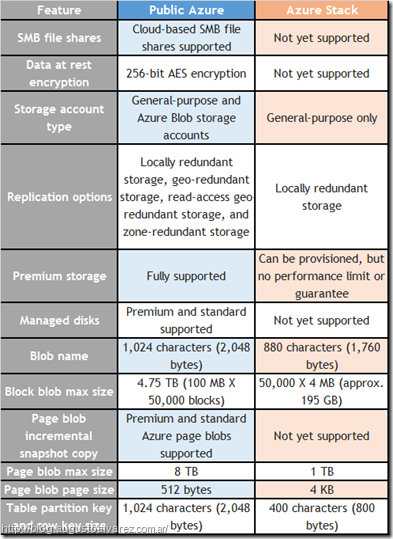 The Marketplace is virtual store and portal containing certified, open source, and community software applications, developer services, and data which are pre-configured to run in Microsoft Azure Stack.

The Azure Stack Marketplace also has some considerations:

In the following article, I’ll make a review about the PaaS services available in Azure Stack, their considerations and the comparison between public Azure.